Why would a major bank be spying on ‘anti-government’ citizens?

A leaked email has shown Bank of America to be working with the Feds to target and track those who associate themselves with organizations that oppose big banks and the corrupt establishment.

BofA actually has a team of 20 people who work full time to spy on Americans.

Is it any more obvious that our government is owned and controlled by major banks and corporations? 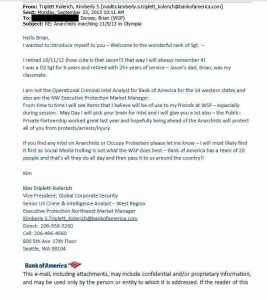