The Bureau of Land Management (BLM) apparently can learn some lessons from the Bundys and other Nevada ranchers besides the obvious ones about American liberty. These gruesome photos show they also need to learn about courtesy, not to mention land management. Maybe the agency should’ve consulted the CIA to at least learn how to hide the bodies of their victims.

Will the EPA fine the BLM for improper disposal of livestock carcasses? Probably not. Chances are the  agents responsible for the theft and illegal cattle massacre will receive a White House commendation.

New photos released by the Bundy family Sunday provided more evidence to the claim that the Bureau of Land Management was illegally killing and burying confiscated cattle.

“Digging up 1 of the HUGE holes where they threw the cows that they had ran to death or shot,” the picture’s description reads. “I feel that this NEEDS to be put out for the public to see.”

The picture backs up reports by several people including Nevada assemblywoman Michele Fiore, who commented on the BLM’s cattle graves last Tuesday.

“Near their compound, right off the highway, they were digging holes,” Fiore said. “They tried to bury some cows on the compound, but I guess they didn’t dig the hole deep enough, so they throw a cow in and they put dirt over him and you have cows’ legs sticking up out of the dirt.” 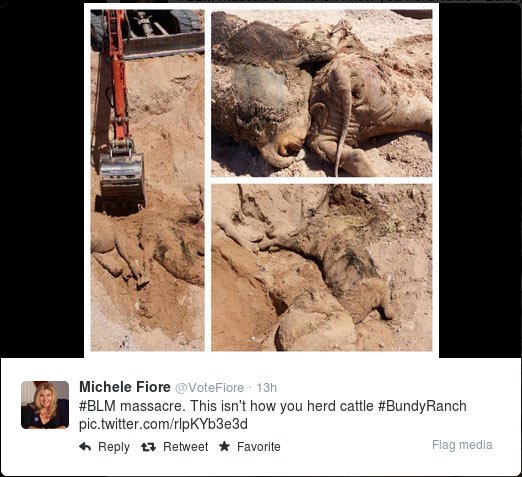 Although the BLM’s court order only permitted the agency to seize Bundy’s cattle, federal agents have thus far already admitted to shooting and killing two prized bulls, claiming the animals were a “safety hazard.”

Video from the area also revealed holes in water tanks, a smashed tortoise burrow, as well as destroyed fences and water lines.

“They had total control of this land for one week, and look at the destruction they did in one week,” Corey Houston, family friend of Cliven Bundy, told Fox News last week. “Nowhere in the court order that I saw does it say that they can destroy infrastructure, destroy corrals, tanks … desert environment, shoot cattle.”

Separate images taken from an airplane also uncovered hundreds of cattle stuffed into small pens on a BLM compound, prompting the FAA to order a no-fly zone over the area. 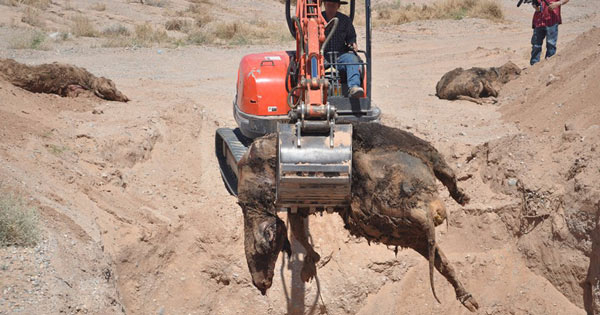