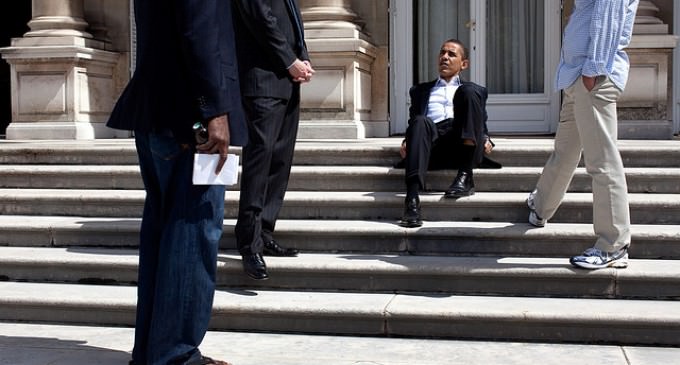 Obama drew a lot of heat for not joining 40 other world leaders and millions of people for an anti-terrorism rally held in France this past Sunday.

No other high ranking official from our government attended, including Eric Holder, who happened to be in France at the time.

The White House now states that someone from Washington should have been there.

But we know the real why Obama didn't attend..all these people, knowingly or not, were marching against him.

Earnest was asked by a reporter to address a rumor that Vice President Joe Biden was “sitting at home all weekend.” Earnest — forgetting his role as the chief dissembler for the Obama administration for a second — answered, “Yes, so was the president.”

I can understand why Vice President Biden didn’t attend; that episode of “I Dream of Jeannie” was on where Jeannie has to get Major Nelson out of a pickle, and ol’ Joe hasn’t figured out how to work the DVR yet.

However, as president of one of the world’s oldest democracies, and the one most closely associated with freedom of speech, wouldn’t the president find himself somewhat obligated to attend one of the largest rallies every conducted in support of it?

The fact that other world leaders seemed to find time in their busy schedules to attend — including Mahmoud Abbas, for heaven’s sake! — shows that standing up to the specter of Islamic terrorism simply isn’t a priority for our president.

And this was after the White House had issued a statement saying that America was “ready to provide any possible assistance to France to help the country overcome the consequences of terrorist attacks in Paris.”

Yet when France asked for quite literally the least the White House could do — send the president or a senior dignitary to provide support in the struggle against Islamic terrorism — Obama voted “present.” Again.