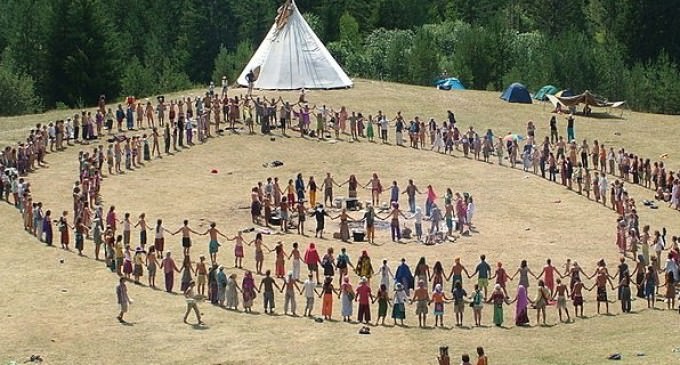 Police in Missoula, Montana have labeled The Rainbow Family, a hippy group that seeks to spread ‘peace, love and non-violence’ as an extremist group and is trying to obtain a grant valued at $254,930 from Homeland Security to spy on them.

The mayor signed off this week on a proposal that if approved would net the Missoula Police Department $254,930 from the DHS to purchase a mobile command unit that would be used to spy on The Rainbow Family, which is listed as an “extremist” organization in the proposal. The unit will also be used by other first responders during emergencies and natural disasters.

The mobile command units, offered to police departments by the DHS after 9/11, are designed to deal with hostage situations, active shooter calls and mass-casualty incidents.

The Rainbow Family “describes itself as a nonviolent group spreading the message of peace and love.” The group has only met twice in Montana in the last fifteen years, once in 2000 and once in 2013. The extent of the “threat” posed by the group is that one of its gatherings was described by the U.S. Forest Service as “rowdy”.

According to a description of the group’s activity, “All Rainbow Gatherings are held with an open invitation to people of all walks of life, and of all beliefs, to share experiences, love, dance, music, food, and learning.” After a gathering in Richmond, Virginia in 2005, Mayor Bob Henry Baber stated, “I never saw one bit of any activity that required any Forest Service legal intervention.”

Missoula Police Lt. Scott Brodie said that during its 2013 event, the group “created a mess that (needed) to be cleaned up”.

Citing a non-violent hippy group which stresses peace and love in order to justify the purchase of a vehicle that would normally be used to combat dangerous criminals or even terrorists is patently absurd and a shocking indication of how far the police state has progressed in America.

While large gatherings such as those staged by The Rainbow Family, during which crimes will inevitably occur, undoubtedly need to be properly policed, to describe the group as “extremist” is complete overkill.

The proposal is even more ludicrous than a 2013 application by the police chief in Concord, New Hampshire, who attempted to justify a DHS grant to buy a BearCat armored vehicle by citing the threat posed by libertarians and Occupy activists in the region.

“We are fortunate that our State has not been victimized from a mass casualty event from an international terrorism strike however on the domestic front, the threat is real and here. Groups such as the Sovereign Citizens, Free Staters and Occupy New Hampshire are active and present daily challenges,” wrote Police Chief John Duval.

Former Marine Corps Colonel Peter Martino, who was stationed in Fallujah and trained Iraqi soldiers,responded to the proposal by warning that the Department of Homeland Security is working with law enforcement to build a “domestic army,” because the federal government is afraid of its own citizens.