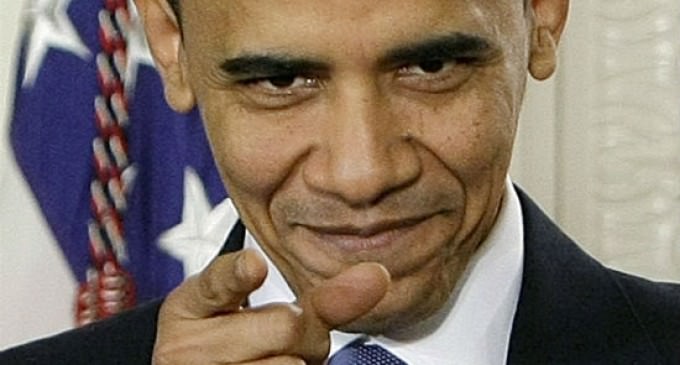 Obama's latest scheme to ‘spread the wealth around' comes in the form of promising free community college on one hand while double-taxing students who were responsible enough to plan ahead on the other.

The formidable organization released a detailed description of the $320 billion tax hike being proposed and noted that one of the ways in which Obama would like to pay for this “free” community college is to penalize those who planned accordingly.
The report reads: (emphasis added)

On Saturday night the White House leaked the major tax hike details of the president’s upcoming budget. The common theme is higher taxes on savings and investment, totaling $320 billion over the next ten years.
“Democrats are demanding, yet again, tax increases on America. This never ends. When it comes to tax hikes Democrats are like a teenage boy on a prom date: they keep asking the same question different ways but always to the same point,” said Grover Norquist, president of Americans for Tax Reform.
Here are the major tax increases in the President’s upcoming budget:
​1. Capital Gains Rate Hike: raises capital gains and dividends tax rate from 23.8% today (20% plus 3.8% Obamacare surtax) to 28% (including the Obamacare surtax).
The capital gains tax has not been that high since President Clinton signed a rate cut in 1997.
It would represent a massive hike in the rate since Obama took office. When he was sworn in, the rate was 15%. He proposes to nearly double it to 28% in the twilight of his administration.
2. Stealth increase in the death tax rate from 40% to nearly 60%.
Under current law, when you inherit an asset your basis in the asset is the higher of the fair market value at the time of death or the decedent’s original basis. Almost always, the fair market value is higher.
Under the Obama proposal, when you inherit an asset your basis will simply be the decedent’s original basis.
Example: Dad buys a house for $10,000.  He dies and leaves it to you. The fair market value on the date of death is $100,000. You sell it for $120,000. Under current law, you have a capital gain of $20,000 (sales price of $120,000 less step up in basis of $100,000). Under the Obama plan, you have a capital gain of $110,000 (sales price of $120,000 less original basis of $10,000).
There are exemptions for most households, but this misses the larger point: the whole reason we have step up in basis is because we have a death tax. If you are going to hold an estate liable for tax, you can’t then hold the estate liable for tax again when the inheritor sells it. This adds yet another redundant layer of tax on savings and investment. It’s a huge tax hike on family farms and small businesses.
It’s like a second death tax (the first one has a top tax rate of 40% and a standard deduction of $5.3 million/$10.6 million for surviving spouses). Conceivably, an accumulated capital gain could face a 40% death tax levy and then a 28% capital gains tax on what is left. Do the math, and that’s an integrated federal tax of just under 60% on inherited capital gains.
3. “Bank Tax”
A new 7 basis point (0.07%) tax on the liabilities (not assets) of the 100 or so U.S. firms with assets over $50 billion. This will obviously be passed along to these firms’ customers and employees, since businesses don’t pay taxes–people do.
4. Tax Increase on Families Saving for College
Under current law, 529 plans work like Roth IRAs: you put money in, and the money grows tax-free for college. Distributions are tax-free provided they are to pay for college.
Under the Obama plan, earnings growth in a 529 plan would no longer be tax-free. Instead, earnings would face taxation upon withdrawal, even if the withdrawal is to pay for college. This was the law prior to 2001.
5. Tax Increases in Retirement Plans and a New Employer Mandate
There would be a new cap in the amount one could accumulate in the aggregate in all IRA and 401(k) type accounts of $3.4 million. After that, you can’t save any more new dollars. The idea is that this is enough to secure a $210,000 annual distribution in retirement, which the government apparently deems “enough” for a retiree.
In addition, all employers with more than 10 workers and who do not have a 401(k) type plan would be mandated to set up payroll deduction Traditional IRAs for their employees. Also, part-time workers would have to be covered under retirement plans if they have been working someplace long enough. These two things are a new kind of employer mandate from Obama.