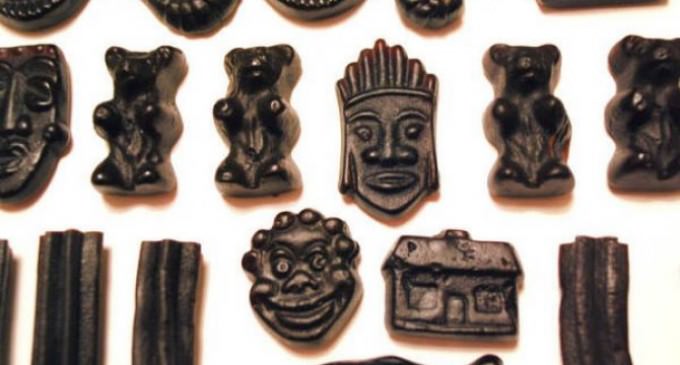 Haribo recently decided to stop selling certain candies in Sweden and Denmark from their Skipper Mix after receving complaints that the pieces were racist.

The Skipper Mix is salty black licorice designed to look like what “a sailor who traveled the world” would have seen in much older days.

So now history is racist.

The offending sweets are in the shape of ethnic masks or facial representations that resemble primitive African, Asian or Native American art

German sweet maker Haribo has stopped selling some of its liquorice sweets in Sweden and Denmark because certain consumers considered them racist.

The sweets, part of the Skipper Mix salty blend that has been on the market for years, will no longer feature the controversial figures in both Scandinavian countries.

Haribo said it had taken into account the critical comments made on the internet in recent weeks.

“We decided that we could keep the product while removing the parts that certain consumers found offensive,” Haribo Sweden head Ola Dagliden told AFP.

The offending sweets are in the shape of ethnic masks or facial representations that resemble primitive African, Asian or Native American art.

They depicted what “a sailor who travelled the world” in days would have brought home in days gone by, Mr Dagliden said.

“It wasn't something we saw as having negative connotations.”

A picture of the sweets was removed from Haribo's Swedish website on Friday, AFP discovered.

Other allegedly racist depictions of African and Asian people have sparked a heated debate in Sweden in the past few years.

In 2012, Swedish tabloid Aftonbladet reported that one-in-ten libraries in the country refused to display or tried to limit access to the comic book Tintin in the Congo, which some claimed was racist.