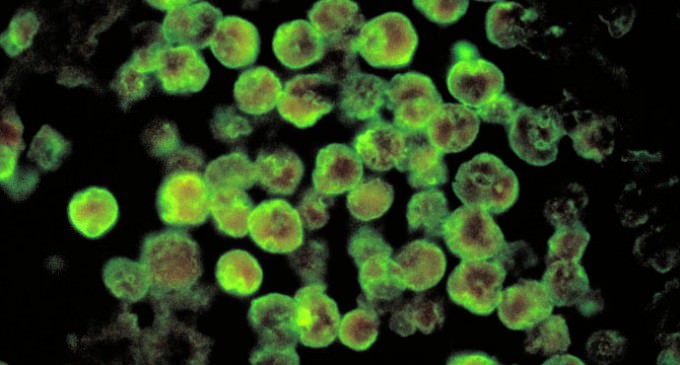 The first confirmed contraction of a deadly brain-eating amoeba, Naegleria fowleri, here in the US through tap water occurred recently in Louisiana after a 5-year old died 2 weeks after picking up the microorganism.

The amoeba is normally harmless and found in freshwater lakes in the southern United States and will only infect someone if it gets far up into the nasal passages, where it can pass through porous bone that separates the sinuses and the brain.

Still, this is quite alarming being found in tap water. Use neti pots only with bottled or boiled water and take care with head submersion in baths.

A study published this month in the journal Clinical Infectious Diseases reported that a 5-year-old Louisiana boy did, in fact, pick up the microorganism from tap water, possibly via a Slip n’ Slide. About two weeks later, he perished from an infection known as primary amebic meningoencephalitis (PAM).

Naegleria fowleri is called the brain-eating amoeba because it can digest neural tissues. Upon entering the body via the nasal passages, N. fowleri penetrates bone between the sinuses and the brain to form an infection, breaking down nerve cells in the process. Ensuing swelling of the brain occurrs, ushering in PAM, which is usually fatal. PAM kills up to eight people per year in the US, usually males with a median age of 12.

The Louisiana boy was taken to a hospital in July 2013 after he acquired a 104-degree Fahrenheit (40° C) fever and complained of a devastating headache, in addition to bouts of vomiting. Doctors later recorded two short “staring episodes,” in which the boy would gaze straight ahead for a few seconds without responding.

The infection, though, could not be identified or halted after several tests and antibiotics. The boy eventually developed seizures, and was declared brain dead. His family took him off life support five days after he entered the New Orleans hospital, according to Newsweek.

His was the first confirmed case to have been triggered by tap or faucet water, and not freshwater immersion, according to study author Jennifer Cope, a medical epidemiologist for the US Centers for Disease Control and Prevention (CDC).

Other cases have been the result of drinking water contaminated via a body of freshwater, such as other cases in Louisiana that have pointed to Hurricane Katrina’s effect on the water supply system. Neti pots, or nasal rinses, have been associated with the microorganism as well, such as one case in the US Virgin Islands.

Louisiana has recently increased efforts to test for the amoeba while advising higher levels chlorine in its water treatment operations. The CDC has an emergency drug called miltefosine to combat PAM cases, though it is not commercially available.

Other studies are probing how N. fowleri becomes infectious.

“This is a free-living amoeba that doesn’t have to infect anybody, it’s perfectly happy feeding on bacteria,” Francine Marciano-Cabral, a microbiologist at Virginia Commonwealth University who is studying the microorganism, said to Newsweek. “What we want to find out is why in some people is it so pathogenic and deadly and what makes it that way?”