Duke Univ. states they are promoting religious diversity, however not too long ago they cancelled a pro-life event at their women's center. What are the odds that they would allow for a Christian themed message or song to be played immediately after the Muslim call to prayer? One senses that the Islamo-nazis wouldn't allow that to happen. 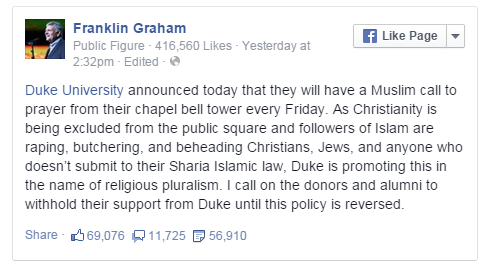 Steve Doocy discussed the call to prayer, which is scheduled to start tomorrow, this morning with Dr. Robert Jeffress, a pastor and Fox News contributor.

Jeffress disputed Duke's contention that the decision is in the name of “diversity,” saying the university once canceled a pro-life event at its women's center.

“Those who cry loudest for tolerance are often the most intolerant when it comes to viewpoints they disagree with. This is a travesty coming from a school that was originally founded as a Christian school by Methodists and Quakers,” said Jeffress.

Doocy asked whether the university will also devote time to “amplify” the Our Father for Christian students.

Jeffress called on Evangelical students at Duke to demand to recite John 3:16 on the loudspeakers.

“I wonder how far that request would go,” Jeffress said.

He added that the First Amendment grants people the right to practice whatever religion they want to, but it does not “mandate that all religions get equal time.”