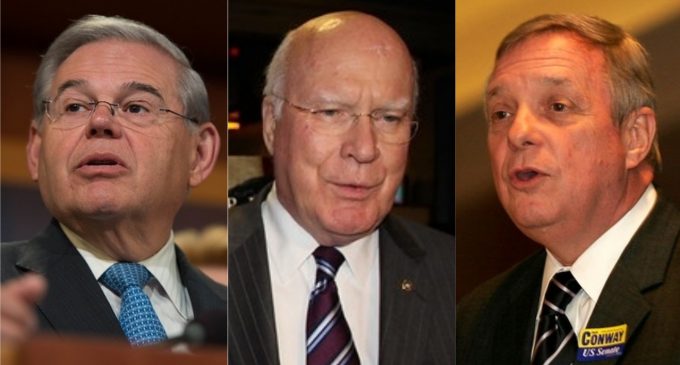 In an opinion piece published Wednesday in The Washington Post, conservative Marc Thiessen revealed that in 2018 three Democrats wrote the Ukranian government with a demand that it investigate President Donald Trump's alleged collusion with Russia in the 2016 presidential campaign.

Ironically, Speaker of the House Nancy Pelosi (D-CA) declared Tuesday that the mere possibility that President Trump had asked Ukraine to continue an investigation of former Vice President Joe Biden — even without a quid pro quo — was enough to trigger an impeachment inquiry. (Biden boasted in 2018 that he had forced Ukraine to remove its prosecutor by threatening to withhold $1 billion in U.S. aid; he did not tell his audience at the Council on Foreign Relations that the prosecutor was looking into a firm on whose board his son, Hunter Biden, was serving.)

It got almost no attention, but in May [2018], CNN reported that Sens. Robert Menendez (D-N.J.), Richard J. Durbin (D-Ill.) and Patrick J. Leahy (D-Vt.) wrote a letter to Ukraine’s prosecutor general, Yuriy Lutsenko, expressing concern at the closing of four investigations they said were critical to the Mueller probe. In the letter, they implied that their support for U.S. assistance to Ukraine was at stake. Describing themselves as “strong advocates for a robust and close relationship with Ukraine,” the Democratic senators declared, “We have supported [the] capacity-building process and are disappointed that some in Kyiv appear to have cast aside these [democratic] principles to avoid the ire of President Trump,” before demanding Lutsenko “reverse course and halt any efforts to impede cooperation with this important investigation.” As you can see in the letter above, the three Senators demanded that the Ukrainian government answer questions about the Mueller probe and made a not so subtle threat: “This reported refusal to cooperate with the Mueller probe also sends a worrying signal — to the Ukrainian people as well as the international community — about your government’s commitment more broadly to support justice and the rule of law.”