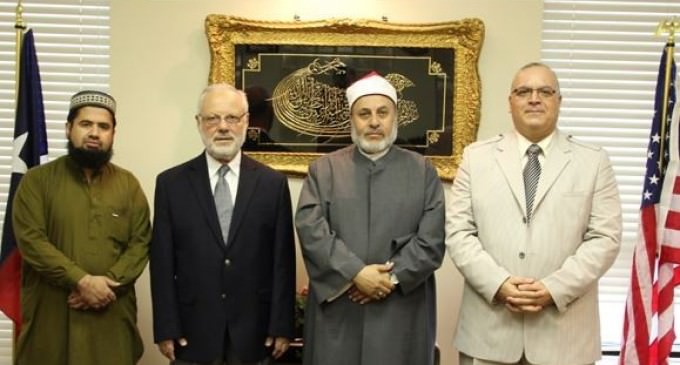 Breitbart Texas has confirmed the existence of an Islamic Tribunal using Sharia law in the state of Texas, a state that has recently seen near physical clashes between Muslims and the Texan community. The tribunal is a non-profit group based in Dallas. One of their attorneys states that tribunal decisions are accepted on a ‘voluntary' basis.

Well, if it's one thing we know of Islamic groups is that they use strict and highly brutal tactics to maintain Sharia law compliance. Right now they are beginning their colonization of America . What is a ‘voluntary' today is done so with the intention of one day becoming much more.

Breitbart Texas spoke with one of the “judges,” Dr. Taher El-badawi. He said the tribunal operates under Sharia law as a form of “non-binding dispute resolution.” El-badawi said their organization is “a tribunal, not arbitration.” A tribunal is defined by Meriam-Webster’s Dictionary as “a court or forum of justice.” The four Islamic attorneys call themselves “judges” not “arbitrators.”

In matters of divorce, El-badawi said that “while participation in the tribunal is voluntary, a married couple cannot be considered divorced by the Islamic community unless it is granted by the tribunal.” He compared their divorce, known as “Talaq,” as something similar to the Catholic practice of annulment in that the church does not recognize civil divorce proceedings as ending a marriage.

He also said there is a difference between how a man and a woman can request a divorce under their system. “The husband can request the divorce directly from the tribunal,” El-badawi stated. “The wife must go to an Imam who will request the divorce for her.” He called it “two paths to the same result.” The practice of Khula is the process where a wife can initiate a divorce proceeding and where the husband can agree to the divorce in exchange for a financial compensation. It appears the wife must agree to give up any claim to the “dower” that was not already paid or to return it if it has already been paid. Once the financial issues are resolved the husband can then proclaim the Talaq (divorce).

El-badawi said they follow Texas family law when it comes to child support, visitation, and custody. He said that in most cases, custody of children is awarded to the mother.

Breitbart Texas asked what happens when there is a conflict between Sharia law and Texas law. El-badawi said most of the time, the laws are in agreement. When pushed further he admitted that, “we follow Sharia law.” However, he explained, “If the parties are not satisfied with the tribunal’s decision, they do not have to accept it and they can take the matter to Texas civil courts.” He did not say what the social ramifications of rejecting the “judge’s” decision would be.

The website for the Islamic Tribunal states, “The courts of the United States of America are costly and consist of ineffective lawyers.  Discontent with the legal system leads many Muslims in America to postpone justice in this world and opt for an audience on the Day of Judgment.”

It goes on to state, “It is with this issue that Muslims here in America are obligated to find a way to solve conflicts and disputes according to the principles of Islamic Law and its legal heritage of fairness and justice in a manner that is reasonable and cost effective.”

In explaining Sharia law, the website states, “Stoning adulterers, cutting of the hands, polyandry and the like (all can be traced in the relevant literature and can be explained in their Islamic legal mentality and rational context in fairness and justice), are mainly a part of Islamic Criminal Law.  In fact criminal law within Islam only makes up a fraction of the Shari’ah.  It is unscholarly and unfair to generalize that type of understanding, that is Criminal Law, to compromise the whole of Islamic law if we stick to speaking in technical terms.”

El-badawi restated several times that participation in the tribunal is voluntary. However, he would not discuss what happens to someone who did not follow their rulings.