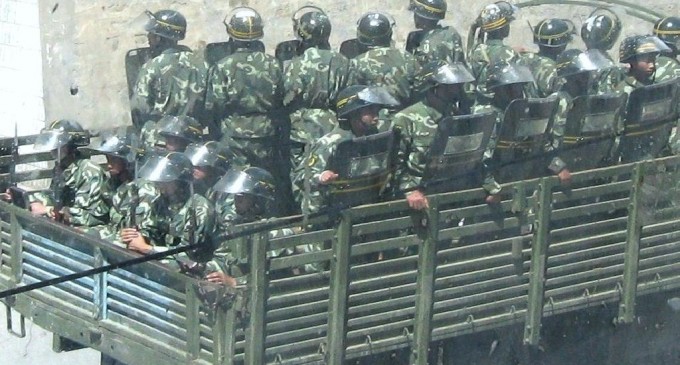 Communist Chinese soldiers will, for the first time, be marching across American land alongside American troops under the premise of training for disaster relief during Grid Ex II.

One must ask, why would the US allow China, who it accused of a major cyberattack on its weapons systems just a few months ago, practice disaster relief on home soil?

Soldiers from the Chinese Army, called the “People's Liberation Army,” are now in Hawaii for what the local news outlet, the Star Advertiser, referred to yesterday as “disaster relief exercises,” coinciding with the little reported Grid Ex II exercises.

Michelle Tan of the Army Times reported today that this will be the first time ever that the Chinese Army will be teaming with American forces.

“The Hawaii-based portion of the exercise is a continuation of an annual — and growing — exchange between the Army and the People’s Liberation Army, said Col. John Lee, strategy and plans officer for security cooperation and policy at U.S. Army Pacific.”

“This is the first time that American and Russian special operations troops have participated in a bilateral exercise.”

There seem to be quite a few “firsts” with communist military forces teaming up with American forces.

Neither article mentions Grid Ex II. But as Timothy Whiteman of the Examiner points out,

“…the Department of Defense official website quietly noted rather generically that Chinese troops were invited to ‘attend next year’s Rim of the Pacific multilateral naval exercise.'”

“The basic purpose behind the Grid EX II training exercises is to gain the cooperation of government, military, and corporate entities in a joint exercise to simulate the effects of a widespread attack on the US Power Grids, as well as on our digital infrastructure.”

As previously reported by the Examiner, many officials in the federal government have warned of the impact of cyber-attacks. Most of these warnings come with pleas to Congress for funding. Former Secretary of Defense Leon Panetta, for example, said that a “cyber-attack perpetrated by nation states or extremist groups” could be “as destructive as the terrorist attack on 9/11.”

“A massive and ‘serious' cyber attack on the U.S. homeland is coming, and a natural disaster [due to global warming] – the likes of which the nation has never seen – is also likely on its way.”

But some are skeptical of the Grid Ex II exercise, as Kenniff wonders,

“Is the purpose of Grid EX II to bring about social chaos and instill martial law on the US?”

His question, of course, seems outlandish.