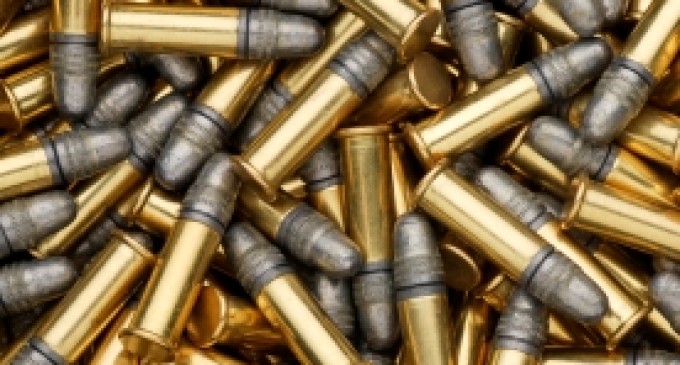 In the latest assault on gun ownership, California passes an ammo permit fee where residents must pay $50 and submit to a background check.

If the check is passed, their name is placed on an electronic list of those eligible to purchase ammunition. If a person’s name is not on the list, they can’t buy ammo.

The California Senate passed a bill in late May that would require gun owners to pay a $50 fee simply for the right to buy ammunition – a free that will be used to administer a background check. The California Department of Justice then would determine if the gun owner has a record that would prevent the purchase of ammo.

The bill, SB53, advanced to the Assembly, where it passed a committee in early July.

If liberals want to derail the right to bear arms and ensure that common citizens cannot afford to defend themselves, the cost-prohibitive purchase ammo fee might do the trick.

How to hide your guns, and other off grid caches…

The great ammo shortage of 2013 is still in full swing. Many store shelves remain relatively empty and demand has driven prices up in locations around the country. Between ammo grabbing by the Department of Homeland Security (DHS) and the California ammo permit law, gun owners in the West Coast state may soon be entirely out of bullets.

Making it more difficult for law-abiding citizens to obtain guns and ammunition may only increase the growing crime rate in the nation’s most populous state. High taxes and laws infringing on freedoms have prompted thousands of California residents to relocate elsewhere, Texas in particular.

The $50 ammo permit bill was but one of several gun bills passed by the Senate. Another bill, SB 374, outlawed “large-capacity” magazines (over 10 rounds) and detachable magazines. It passed the Senate and currently is in the Assembly. The Assembly passed a bill, AB48, that requires the California Department of Justice to notify local law enforcement officials if someone purchases more than 3,000 rounds of ammunition within a five-day period.

California state Sen. Tom Berryhill, who voted against the bill, said requiring an ammo fee would “do nothing to stop criminals from purchasing ammunition.”

“These restrictions – like most of the gun legislation we are seeing here today – won’t do a thing to stop crime,” he said, according to CNSNews.com. “They will only hurt the law-abiding citizens like hunters and sportsmen who, for the record, contribute millions to the state’s economy.”

Here’s how the ammo permit bill – if it becomes law – would work: Prior to gun owners purchasing ammunition at a local store, they first must pay the one-time $50 fee and be subject to a background check. If they pass, their name is placed on an electronic list of those eligible to purchase ammunition. If a person’s name is not on the list, he or she can’t buy ammo.

Buying and manufacturing semi-automatic rifles which can accommodate detachable magazines will now be illegal as well. Any California citizen who currently owns such a weapon must register the rifle with state officials.

All the anti-Second Amendment laws will do is cost California gun stores and ammo retailers business – potentially creating employee layoffs in the process. Gun-owning residents simply will opt to buy their ammunition online and venture into a bordering state to fulfill their needs. The semi-automatic rifles portion of the law will do nothing to deter crime, Second Amendment advocates say. As Indiana Boone County Sheriff Ken Campbell demonstrated in a video that went viral, any size magazine can be emptied and reloaded (by any level of shooter) quickly. Thus, a villain with several five- or 10-capacity magazines can still kill a multitude of people in a short amount of time.

Surviving Doomsday author Richard Duarte, who also is a Miami attorney and firearms expert, said there is a bill in the Florida legislature “that would make it illegal for individuals to purchase ammunition unless they had completed a state-approved anger management class.” Violations could result in at least 60 days in jail and up to one year, he said.

“Have we all lost our minds?” Duarte asked. “And what kind of idiots are we electing to public office? How can any rational person look at this pending bill and think that it makes any sense at all, or that it would have any sort of positive impact? If it’s not already obvious, it will soon become painfully obvious that the average citizen has to start paying attention and taking a more active role in holding elected officials accountable for their actions. If we fail to do this, there will be a time, in the very near future, when we will look around and not recognize the country we live in.”

In May, California Attorney General Kamala Harris certified legislation which mandates that all new semi-automatic handguns utilize stamping technology, which would provide identifying information on bullet casings. It will be required on new semi-automatics, Harris said. According to KABC-TV, the law requires semi-automatic guns to stamp the gun’s make, model and serial number on each bullet. The law is being challenged in court by the Second Amendment Foundation and the Calguns Foundation.

Gene Hoffman, chairman of the Calguns Foundation, called the new law part of an “incremental ban on firearms.”

Said Second Amendment Foundation Executive Vice President Alan Gottlieb, “It is clear the intent of anti-gun lawmakers is not to regulate firearms but to ban them via increasingly restrictive legislation.”

Signs like this one have been popping up in the yards of California gun owners: “My neighbor doesn’t like guns, so I promise not to use mine to defend him.”

At this point, a poignant slogan born out of frustration is about the only recourse pro-Second Amendment Golden State residents have in the fight for their gun rights — unless they can afford to move. The desire to not have Ted Nugent living next door has been expressed by some anti-Second Amendment activists there. The short-sightedness of such an argument may become tragically clear if the “gun free zone” folks are faced with an intruder at their door. I would much rather have a Ted Nugent type living next door instead of a helpless victim who could not help protect my family during civil unrest. A smile and a cold glass of lemonade will not dissuade a drug addict or gang member during a search for an easy target — but my Ruger handgun would make a lasting impression.