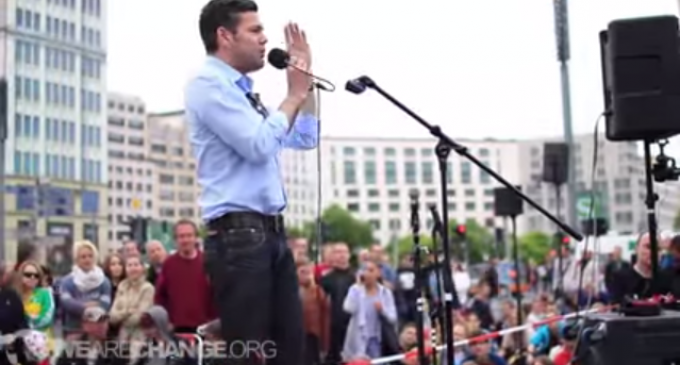 Protests throughout Germany last year, in upwards of 100 cities, in protest of the US Federal Reserve system.

Understanding that the Federal Reserve is the cancer of the US and of the world, these Germans understand they are putting themselves at risk with these protests as the German government and newspapers are labeling them as Nazis for not supporting central banking.

“I’m a Nazi because I’m for peace, why?” states journalist Ken Jebson, who was fired for promoting the protests.

This is just what is happening here in the US, where patriots, conservatives, veterans and Constitutionalists are being labeled ‘terrorists’ because they don’t agree with the rising socialism we are all seeing.

What is happening in the US is happening worldwide – Marxism is starting to take more and more control and people are waking up to what is really going on and as they protest, are being labeled as the ‘threat’ to others.

“It’s possible, change really change, not change in the White House, you know. All you have to do is just do it. And when you do this you become a target. But do it! This is a risk but the whole life is a risk,” states Jebson.

The Federal Reserve is neither ‘federal’ nor a ‘reserve’. It’s a conglomerate of private banks that controls our currency. Our Founding Fathers knew all too well that for a private bank to control our currency is the greatest threat to our freedom:

“I believe that banking institutions are more dangerous to our liberties than standing armies. If the American people ever allow private banks to control the issue of their currency, first by inflation, then by deflation, the banks and corporations that will grow up around [the banks] will deprive the people of all property until their children wake-up homeless on the continent their fathers conquered. The issuing power should be taken from the banks and restored to the people, to whom it properly belongs.” Thomas Jefferson

“It is well enough that people of the nation do not understand our banking and monetary system, for if they did, I believe there would be a revolution before tomorrow morning.” Henry Ford

If you don’t understand what the Federal Reserve is and how it controls our nation you need to watch them movie below. It’s a cartoon and has a slow start, but overall does a good job at bringing understanding how our financial system really works: