The allegations against California Democratic state Senator Leland Yee include a $2 million arms deal involving Muslim terrorists, Russian weapons suppliers, and accepting bribes to influence state policy. Yee’s fundraiser, Keith Jackson also faces charges for his involvement including alleged deals with a San Francisco organized criminal organization, Chee Kung Tong. Jackson, who is black, has now claimed to be the victim of racial discrimination, which is probably not an effective excuse for this (or any) level of corruption and criminal activity. 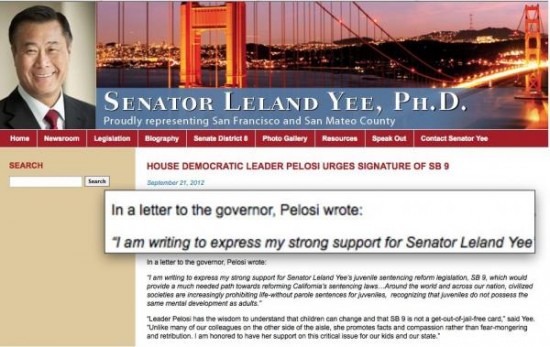 Yee took personal responsibility for delivering the weapons:  “Senator Yee said, ‘We’re interested’ in arranging the weapons deal […] and said of the arms dealer, ‘He’s going to rely on me, because ultimately it’s going to be me. [The agent] stated he would compensate Yee for brokering the relationship and arms deal.”

Yee masterminded a complex scheme to import illegal weapons: “Keith Jackson [a political consultant who worked as Yee’s fundraiser] told [an agent] that Senator Yee had a contact who deals in arms trafficking. This purported arms dealer was later identified. Jackson requested [a campaign donation] on behalf of Senator Yee, for Senator Yee to facilitate a meeting with arms dealer with the intent of [the agent] to purportedly purchase a large number of weapons to be imported through the Port of Newark, New Jersey. During a meeting […] Senator Yee discussed certain details of the specific types of weapons [the agent] was interested in buying and importing.”

Yee had connection with Filipino rebel groups: “Keith Jackson advised that Senator Yee had an unidentified Filipino associate who was supplying ‘heavy’ weapons to rebel groups in the Philippines.”